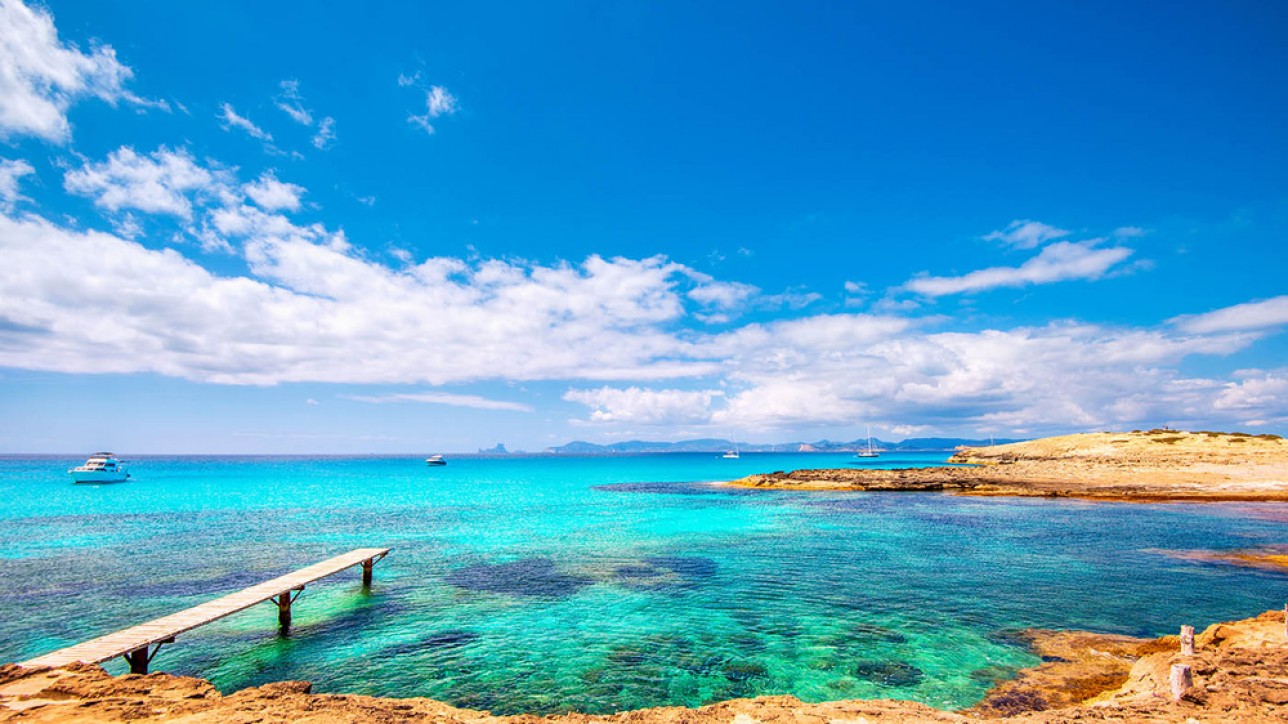 What’s in a name?  Pityusic/Pitusic – Pitiusas/Pityuses – the Pine Islands – these are the various names and spellings of two of the Balearic Islands – Formentera and Ibiza, separated only by 2 nautical miles.

Other names for Formentera – “Magic Formentera”, “Fantastic Formentera” “Caribbean Formentera” – for such a small island, there is a plethora of names, all very complimentary.   Measuring just over 83 sq. kilometres, and thanks to its peculiar indented shape, there is 69 kilometres of coastline, 20 kilometres of which are pure beach.   Beaches to rival anything in the Caribbean – turquoise clear water rippling over white sand – the island’s most iconic picture is the spectacular beach of Illetes.

The smallest inhabited island of the Balearics (the others being Ibiza, Menorca and Mallorca), it is an oasis of tranquillity, whose people are charming and hospitable.  The port of La Savina, in the north of the island is the largest port, with two marinas, with berths from 8 – 38 metres.  One of them acts as the ferry dock – which gets very busy in the summer with regular ferries every day from Ibiza.   The only way to get to the island is by ferry or boat – with the ferry trip taking approximately 35 minutes.

The capital is Sant Francesc Xavier, with its historic square and parish church.  Completed in 1738, the church’s austere appearance is because it also had to act as a defensive fortress against marauding pirates!  The cemetery Fossar Vell, restored by the Formentera architect Maria Castelló, was the finalist of the FAD 2017 awards in the category of City and Landscape.    (FAD – Fomento de las Artes Decorativas set up in 1958).

There are so many more pretty villages to be explored, each with their own charm.  Museums, art galleries, exhibitions of local craft, restaurants (try the dried fish, peix sec, one of Formentera’s typical products and an essential ingredient in their traditional salad), historical/cultural sites – some dating from pre-historic times, coastal defences (watchtowers and lighthouses), flour mills, cisterns and water tanks to catch and keep rainwater, waterwheels and wells.  Being surrounded by the sea meant that many families had their own little boats for fishing, and it is estimated that there are about 360 boathouses on the island!

For such a small island, there is so much to do: water sports, such as snorkelling, diving and paddle surfing are so much more enjoyable in crystal clear waters; 32 green routes which crisscross the island are ideal for exploring, either on foot, by bike or on horseback.  It is a bird watchers paradise – over 200 species of birds pass through the island at different seasons and for different reasons (rest, nesting, food).  From August to October hundreds of flamingos migrate to the Nature Reserve Ses Salines.  This natural park is shared between northern Formentera, southern Ibiza and the sea in between, and has been declared as World Heritage by UNESCO since 1999.  The original Ses Salines salt mine ceased functioning in 1984, but has recently been revived, producing liquid salt which is said to be so pure that it is regarded as heart friendly salt.

Other things to do: live music everywhere in the evening, at the craft markets, especially jazz at the Formentera Jazz Festival in June: traditional dancing in the streets and squares: watching the sun go down from many beach bars, but especially from the lighthouses of La Mola and Es Cap de Barbaria.

And one last thing – unique trees!    Fig trees themselves are not unique, but how they are grown in Formentera is.  Stakes in the ground are used to support the trees so that they grow horizontally rather than upwards.   Makes collecting the figs so much easier!