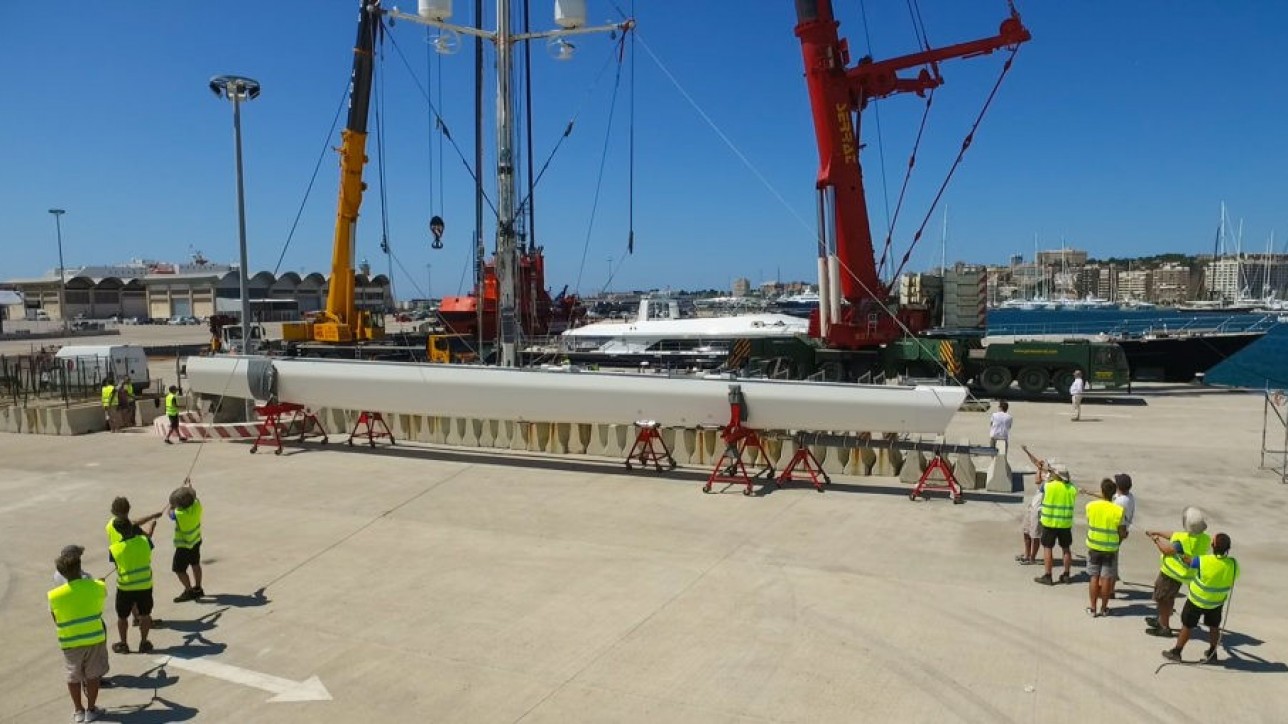 Ever since man started using sails in 5500 BC (found on painted discs from ancient Mesopotamia), he has relied on sail power to get him from A to B.  Of course, hardy sailors like the Norse Vikings liked to add rowing power to wind power, but even they couldn’t row the entire way across the Atlantic on their route to North America.

Obviously sails harness the wind, but something was needed to attach them to – and in steps the mast.    Stays, spreaders, boom and bowsprit, known as standing rigging, hold the mast in place.   They also served as ladders which let the crew climb aloft, either to furl/unfurl the sails or to get to the crow’s nest to keep a look out for land, channels through the coral, icebergs, pirates or warships.   Sounds like stories from long ago, but we still need to keep an eye out for icebergs, pirates or warships (not in the Mediterranean obviously!), but now a lookout’s eyes are aided by radar from the confines of a modern, well equipped wheelhouse.

The sails are controlled by the running rigging – lifts, halyards, guys, sheets and vangs and now a days, push buttons.  Originally fashioned from rope, running rigging is now made from synthetic fibres, while standing rigging used to be mostly fashioned from twisted strands of stainless steel, but around the 80’s rod rigging was developed as an alternative to create a stiffer rig to increase performance.   Other types include cobalt, carbon and Kevlar rod rigging.

Rigging is also useful for getting a sailing boat under a low bridge or hauling it off a sandbank if you’ve gone aground.  Hang something heavy, either directly from the top of the mast or from the end of the boom – bags of water, a partially filled dinghy – whatever you have to hand, to make the boat heel and bob’s your uncle.

Rigging isn’t just restricted to sailing yachts but is also used on motorboats to support radio antennae, radar, and for displaying lights and signals.

From the cluttered, messy deck of a 3 masted barque, rigging has evolved to the ultra-clean lines of Sailing Yacht A with its 3 unstayed carbon masts, the tallest of which is 100 metres above sea level.  The sails are a combination of carbon sand Technora fibres, and its fully battened mainsail is a single piece, 1,464 sq. metres.    No need to climb the rigging or be winched up to the lookout point on this vessel – an enclosed electric gimballed crow’s nest zooms 60 metres up the mast – what an amazing experience, and view, that must be.

It’s vitally important that rigging is regularly checked, repaired, updated, refitted and there is no better place to have that done than at RSB Rigging Solutions. Based on the beautiful island of Mallorca, in the Muelle Viejo, Palma, RSB Rigging provides a complete rigging service.  Formed over 14 years ago, they are a fully professional, well trained and reliable rigging service supplying the highest quality parts, materials and equipment to their customers.  Time and time again their clients come back to them for superyacht rigging refit and repair.  Whether it be for gran prix racing, or busy superyachts, RBS Rigging is the place to go. With 5 separate services – Running Rigging, Standing Rigging, Spars and Inspections, Hydraulic Services and Load Test and Heavy Lifting certification, they provide a fully integrated rigging and hydraulic service.  Indeed, they are the only company in Spain to have been granted LEEA approval (Lifting Equipment Engineers Association) certification.  This globally recognised company (RSB Rigging) has become one of the leading rigging companies by providing the highest quality service in rope and running rigging to the superyacht sector, frequently carrying out complete rigging refits on household names in yachting terms.  No job is too small, nor too big for them to handle.

A bit of fun:  Another use for a mast – the Mast walk.  Some people really like to challenge themselves, such as solo round the world yachtsman Alex Thomson.  In 2014, wearing a suit, he climbed the 30-metre-high mast of “Hugo Boss” while under way. On reaching the top, he dived off – fully clothed, wearing sunglasses – Hugo Boss of course!

We use cookies on our website to give you the most relevant experience by remembering your preferences and repeat visits. By clicking “Accept”, you consent to the use of ALL the cookies. Read More Accept Reject
Manage consent

This website uses cookies to improve your experience while you navigate through the website. Out of these, the cookies that are categorized as necessary are stored on your browser as they are essential for the working of basic functionalities of the website. We also use third-party cookies that help us analyze and understand how you use this website. These cookies will be stored in your browser only with your consent. You also have the option to opt-out of these cookies. But opting out of some of these cookies may affect your browsing experience.
Necessary Always Enabled

Performance cookies are used to understand and analyze the key performance indexes of the website which helps in delivering a better user experience for the visitors.

Analytical cookies are used to understand how visitors interact with the website. These cookies help provide information on metrics the number of visitors, bounce rate, traffic source, etc.

Advertisement cookies are used to provide visitors with relevant ads and marketing campaigns. These cookies track visitors across websites and collect information to provide customized ads.

Other uncategorized cookies are those that are being analyzed and have not been classified into a category as yet.